Always an outward-looking, globally-tuned organization, MUTEK was initiated to connect Montréal with international creators and to encourage creativity at home by giving local artists a quality platform for expression and development. The festival’s commitments to networks, interconnectivity and exchange culminate in another strong showing by Canadian and Québec artists at MUTEK.MX, November 18-24.

One of the most solid and bold music producers that has ever come from Canada. One may pick at random any of his diverse LPs, EPs or singles released since 1996 and always land in a great moment of electronic music filled with groove. Strongly anchored in dub, minimal techno and sound landscapes, Deadbeat has made us trust in his vision as a producer by expanding, mixing or contrasting these foundations with a forward-thinking vision. His seventh participation in MUTEK MX will come under the influence of Jacks and Slow Dances (Visionquest Music, 2019) two new tracks, with a powerful and nocturnal sound that connects with bass music and dark techno, aligned with the contemporary clubbing scene, with that distinctive Deadbeat touch that never gets old.

Responsible for some of the most inspiring club anthems of the past decade in the Canadian circuit and co-founder of the Wagon Repair label, Mathew Jonson seeks to expand the boundaries of genres such as House or Techno, many times assisted by Jazz lines, not only in his live sets with analogue gear, but also as part of the groups Cobblestone Jazz and The Modern Deep Left Quartet.
Under Freedom Engine, a new moniker based on the title of his 2002 album, Mathew expands his sound pallet with a conceptual paradox: exploring freedom through technology and machinery. With Box Full of Magic, the album that is going to debut through the new label of Dekmantel, Mathew reveals a new sound narrative filled with melodic instruments and psychedelic rhythms with cosmic inspiration. MUTEK.MX Edition 16 will be one of the first spaces in the world to present the Freedom Engine live set.
Remember that Mathew Jonson will also perform as part of Circle of Live along with Sebastian Mullaert, Dorisburg and Frank Wiedemann (Âme Live) in a six-hour live set.

Jimmy Lakatos started out in Montréal working with video in public spaces and early raves, and has developed a reputation for impressive analog light shows and minimalist video projections. He has worked professionally for Cirque du Soleil and has been a long-time video-scenographer for MUTEK. He's known for his passion to create work that intimately links and locks the audio and the visual — not just as a third element, but as its own discrete entity and experience.
Radiance is based on their (Murcof MX and Jommy Lakatos) previous work, Nebula, an immersive A/V installation consisting of a laser and reflective materials, creating a rich and fragile imagery using the refraction of light, created by Jimmy Lakatos. Radiance expands on this idea by adding more lasers and other ways of controlling them, via specialised software and directly with sound, thus expanding the palette of possibilities for a richer experience. The viewer is therefore invited to live a cinematic experience through celestial, abstract and geometric imagery. Expect a sublime, extra-dimensional encounter that unfolds in a theatrical space as a novel and affecting cinema of sensations. 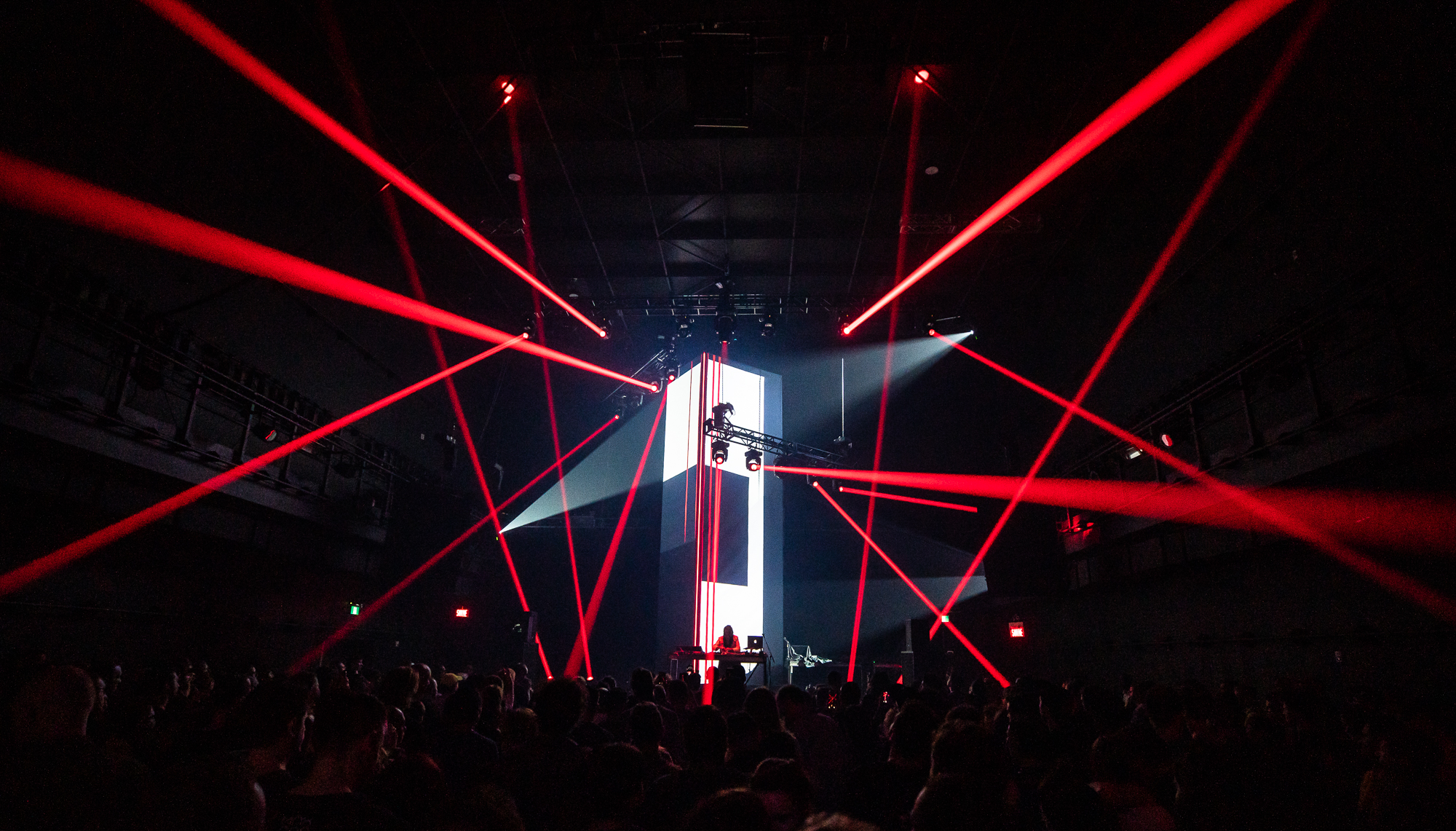 Ourielle Auvé has been classically trained in piano, harp and cello, but electronic music has been the prism that made all the colors of Ouri sprout. There, in the infinite possibilities of digital sonority, Ouri takes R&B and house abstractions and transforms them with instrumental iridescences and inciting percussions. Maze (Make It Rain Records, 2017) and Superficial (Make It Rain Records, 2017) are albums full of pop smoothness with sharp edges carved by a risky and precise production, while We share our blood, her debut for Ghostly International, brings her most harsh and experimental side. Also, in these couple of years, Ouri’s tracks have been expanded to left-field club with remixes made by producers such as DEBBY FIRDAY, mobilegirl and Minimal Violence, meanwhile collaborations with Odile Myrtil, MUNYA and Mind Bath polish the pop diamond that hides inside Ouri’s music.

Blurring borders between musician and machine, Tim Hecker creates environments of sonic craters and mountains, awash in storms cracked with sunlight. From bleak soundscapes to melodic explorations of acoustic instruments and choirs run through with digital dexterity, Hecker resists languishing in any genre. While traveling extensively in Japan, Hecker became obsessed with the intricacies of Japanese Gagaku court music, letting its silent intervals, harmonic direction and inherent patience guide his newest electronic compositions, which incorporate the 17-pipe horn shō and ryuteki instruments, cello and open tuning distorted electric guitar. For albums Konoyo and Anoyo, the recording process positioned Hecker as a band leader surrounded by his machines, collaborating with Japanese musician Motonori Miura and several gagaku musicians, cellist Mariel Roberts and Canadian composer and organist/synth musician Kara-Lis Coverdale (also on a quest to blur the lines between human and machine, sacred and sampled). Konoyo means roughly “the world over here”, Anoyo “the world over there.”

Extraordinary illustrator and creative technologist, Sougwen Chung is one of the artists tracing the path for the artistic collaboration between machines and humans. Each of her projects is the result of a deep multidisciplinary research that involves drawing, sculpture, programming and robotics, resulting in performances and immersive experiences, which, despite her short trajectory, have already earned her artistic residences at Google, Eyebeam, Japan Media Arts and Pier 9 Autodesk and exhibition spaces, and also a speaker in platforms such as Art Basel, Tribeca Film Festival, OFFF Barcelona and Cannes.
Sougwen is part of a generation of pioneers and artists, which, in addition to pushing for a creative use of robotics and artificial intelligence, is generating aesthetic experiences, with a direct dialogue between machines and robots. Her signature is her extraordinary sensibility as a painter and illustrator, allowing her to create unique moments that mix distant glimpses from the past and the future, thus giving birth to visual creation.

Québec and Canadian Artists at MUTEK Japan and Mexico